Hey there. We had ourselves a nice, long 4 day weekend. We took Thursday and Friday off from work so that we can have at least 2 full days with the kids during their Spring Break vacation. Even though, it was supposed to be a time of relaxing, we spent a lot of time running around. lol

On Thursday, we deposited checks into the bank (this is a big deal for us since we RARELY go to the bank. We don't carry around much cash and any cash that is drawn is usually in the form of "cash back" at local retailers), our boy needed a hair cut (which lasted almost an hour!), and then we had our doc appointment to check up on our soon to be little one. The kids were pretty excited, since Dr. Hill played the baby's heart beat out loud so we can all hear. Strong, healthy baby, as she said. We ended the evening with a family dinner at Norm's.

On Friday, I took a trip to the county registrar. Oh man, was that a nightmare. We needed our little one's birth certificate and because I'd figure it would be a in and out trip, we didn't give ourselves much "wiggle" room for time. After spending what felt like an eternity, we zoomed to my mother in law's place, where my wife was anxiously waiting for me, and with out hesitation, my mother in law jumped out of the car, and my wife jumped in and off we went to Lip Service. A friend of ours works there and she was able to score us some bad ass deals on clothes. No BS, we managed to score 5 shirts for my wife and this bad ass jacket for me and our total was like $25. Now that is a bargain! From there, we grabbed something to eat and off to the mall for some maternity clothes and shoes, since my wife needed some. We managed to score on the clothes but was only able to find one pair of shoes that were her taste. While at home, my wife scheduled a Rock Band night for a weekend coming up. She threw in a twist though. Everyone invited is to be dressed up as a "rocker". lmao You know I'll be posting pics of that!

Saturday was more of a work day, I guess. I spent a good chunk of the morning doing house work, which included yard work (I hate weeds!) and washing the car. Other than that, this was our day to rest. We took the afternoon off and just relaxed some. That night our little one said something that we weren't expecting for another 15 or so years... She marched out of her room, came directly to me and said, "Daddy, I want a dragon on my arm just like you." We laughed. It was so sudden and unexpected. So I did what any sane parent would do, I grabbed a pen and drew one for her. lmao Check it out. She looks sooooo happy. lol 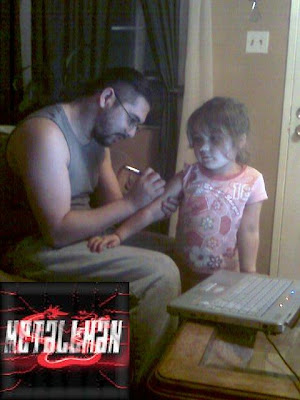 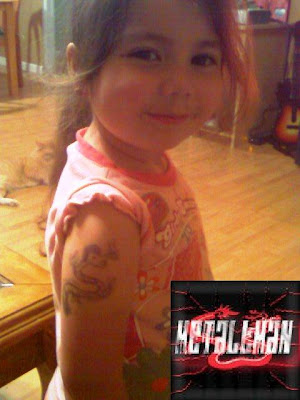 This little one. I know we are going to have our hands full.

Sunday was Easter Sunday. We went to my wife's Aunt's house for an egg hunt, but before that, we had our own hunt at home. We didn't just hand the kids their baskets, they had to earn them. The night before, my wife and I sat and came up with clues to guide the kids to their baskets. They had the camcorder with them so we got it all in their perspective. Over at egg hunt, my wife's cousins filled some of the eggs with confetti or baby powder so many people got smashed in the head with them. There was a HUGE mess on the floor and because of it and because of it, people slipped as they walked. I tripped out most of the afternoon on my brother in law. He's about 13 and just sat in a chair camping out, surveying the area to assure that he would not be ambushed. It seemed as if he was playing a real life game of Rainbow 6 or something. lol Man, that was hilarious.

I also caught this one movie called Old Boy. I want to get into detail with that one so I'll do separate post, but I do want to say is that this movie is BAD ASS! Later!
Posted by Metallman at Monday, April 13, 2009