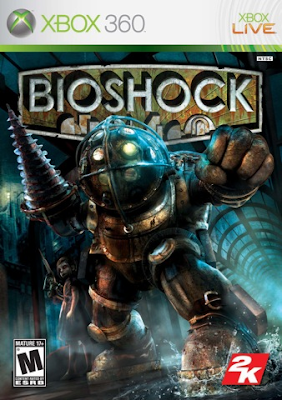 Hey there. Last night, I finally got to getting through Bioshock on the hardest difficulty, HARD. It took some time because my initial run through of the game was just to get through it. Well, because the XBOX 360 has achievements, I just had to go through the game again to obtain them. One of the more difficult achievements require you to get through the game without dying. Any gamer that can do that, will be awarded with the achievement badge and can be displayed proudly on XBOX Live. I managed to do it. I finally got through all the Big Daddies, all the Little Sisters and kicked Atlas' ass. What? No achievement?!?!?! NOOOOOOOOOO!!!!!!!

To put it bluntly, I am upset. It's tough to go through that game without dying and now I've come to realize that I need to do it again. Not only are you supposed to go through the game without dying, but you have to turn off the vita-chambers. This was upsetting. Even though I didn't use them (they can be considered automatic save points), you need to tell the game to turn them off before setting off on your mission. A small detail that derailed my chance for the achievement from the start.

Now, you must be thinking, "Metallman, you're complaining over a game that has enemies called 'Big Daddy' and 'Little Sister', how hard can it be?" Friends, the game is pretty damn hard. Let me paint a picture for you. As you roam the hallways of Rapture (the games city), blasting away at zombies and the half dead, you hear a little girls' voice. Being the big, tough guy that you think you are, go to the voice to rescue her from all the monstrosities that surround you. As you approach her, she flees. What the hell? Maybe she's just a little scared, you say. Nope, she sees you as a threat and is summoning her Big Daddy to come and kick your ass. All the while, zombies and what not ambush you. Yup, that sums up the game nicely. lol Imagine turning the corner and seeing one of these bad boys... 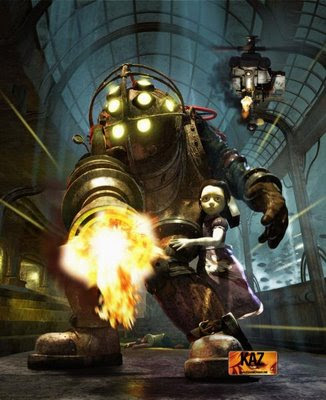 And the Big Daddy is not a boss fight, or anything of that sort, they are roaming the hallways, just like you are. And to think... I need to do it all over again, all because I didn't turn off the vita-chambers. Ugh... Later!