Hey there. I've been on a mission to get through the song Green Grass and High Tides (GGHT) on Expert difficulty in Rock Band. I've failed many times. The song is long and the solos on this song are pretty insane. Especially, solo #2. This weekend, I was able to get through 93% of the song (the game tells you how much of the song you've completed before failing) and it was heart breaking to fail that far into the song. My boy, being a Rock Band enthusiast, yelled out the unmistakable, "AAAAAHHH", when I failed. Well, last night, I finally got through it. I've gotten into the habit to play GGHT at least once, before I turn my 360 off. I've been trying to collect the games achievements for passing the game on all difficulties. It's been a bit of a chore to have to play the songs on the lower difficulties for the achievements, but eh, I want them all. lol I'm currently in the last leg of the game in HARD so I'm almost ready for the EXPERT difficulty.

Anyways, while playing the song, I failed in the same spot, at around the 93% mark, but decided to give it one more go before calling it quits. Glad I did, cause this time I nailed it! And got me 5 stars on the song too. I'm sure it's not the best score out there, but it's MY best score. Damn proud of it too. Took a pic with my camera phone to document the moment. lol

Now... I'm hoping it wasn't a fluke and I'll be able to do it again during the solo campaign mode. The below score came while playing the song during QUICKPLAY. Until then, Later! 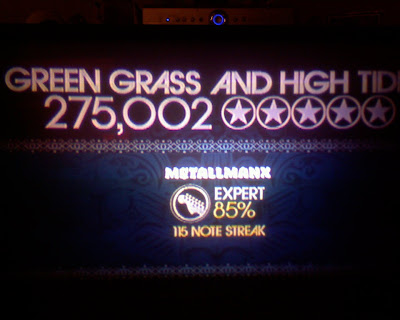 Posted by Metallman at Wednesday, February 04, 2009