Welcome to the Wolrd of MagNext

Hey there friends. Looking for an online, kid friendly environment where battles of skills are tested daily? Then the virtual world of MagNext is for you. Sign up is quick, easy, and free. Once you've created your character, which is a sphere, then you can explore the virtual world of Magnext. Seeing the screen shots of the Magnext world, I figured that my son would enjoy a site like this, where he and his other car enthusiast friends can join and play. After I tested the waters, I was pleasantly surprised that the community works a lot like a role playing game. On the "world map" other spheres will be roaming around and on occasions, battle you for bragging rights and experience points. I was in the game no more than a minute when someone challenged me. I declined though. Being a seasoned RPG player, I'd be a fool to go into battle without leveling up and equipping some gear.

Leveling up is not a tough task, here. You can do it through battle or you can level up through many of the mini games that are scattered in the MagNext world. I tried out The Spheron Speed Challenge. A game where you are blasted from a launcher and you must guide your character through the street while picking up power ups and avoiding the obstacles. The challenge here is to get your character to travel the farthest before it runs out of juice. Considering it that it was my first time, I don't think I did so bad. Me, being a guy of stats, will want to improve my ranking. Check it out. 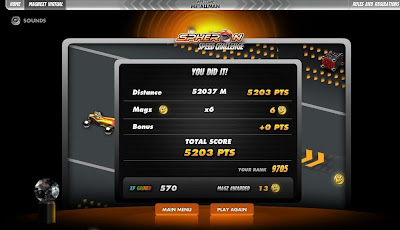 I'm still a rookie at this but I will be getting better. I was looking for a kid friendly environment for my son, but seems like I found a past time for me. Feel free to add me to your MagNext friends list. I'll make sure that when we do battle, I will be ready. Later!