Up and Running with XBOX Live

Hey there. I received my XBOX 360 on Monday. I hooked it up and I was welcomed into the world of XBOX 360. I needed a game to test out so I ended up getting Bioshock. G4 highly recommended it and I ended up getting a special edition of the game that came with a soundtrack and behind the scenes DVD. I popped it in and to my dismay, I needed a memory card/ hard drive. Aw man. I figured it would of had a small amount on internal memory that I would be able to use. No chance. Not even enough free memory for a gamer profile. What's a Metallman to do? Get his ass over to game stop and get one, that's what. After doing some shopping around, I decided that the 60 Gig hard drive was the best choice. It even came with a 3 month's subscription to XBOX Live and a headset to communicate with friends. How bad ass is that? So last night, I set the whole thing up. Welcome, METALLMANX. 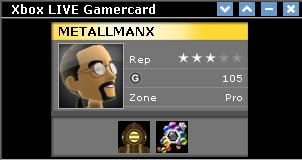 That's my gamer code (or profile... I'm still not all familiar with the lingo) so if any of you out there want to get it on in Rock Band or Bioshock (that's all I have so far) feel free to add me. As an added bonus, I'll cough up 250 ECs for anyone that adds me as a friend and mentions it in the friend request. I want to take full advantage of the XBOX Live community and gamers are allowed to play with or against friends from all over the world. Later!
Posted by Metallman at Wednesday, December 03, 2008