Hey there friends. Man, it was a mission to get Rock Band on at our place this weekend. In a previous post, I stated that I was able to get it at a reasonable price while getting 30% cash back. Well, I received Rock Band on Thursday and to my dismay, there were no breakaway cables in the box. You need those cables to hook up the instruments to the XBOX 360. Considering that it was pretty late, I left a voice message to the store I got it at. Discouraged, I put the instruments away and figured I'll try em on Friday. Come Friday, I called again and their customer service people said they would ship the cables to me. BUT IT'S FRIDAY AND I NEED IT BY SAT!!! I figured, I'd go buy a cable and at least that way I can test the drums and guitar that came with Rock Band, considering that I got a Wireless guitar, we should still be good to go. So I get a cable at my local Gamestop and hook it up to my drum set. NO POWER! WTF?!?!?! Everything is hooked up yet the drums are not turning... Let's try the guitar. Put batteries in the guitar, hooked that up, NO POWER!!! I was getting pretty damn upset at this point. I tested out the microphone... NO DICE! Shit! I figured that maybe my USB ports on my XBOX 360 were disabled or something, so I ended up calling the XBOX 360 support line. After registering my console, the agent gave me a pretty simple test to check out the USB ports. He simply asked me to plug in my phone via USB into the ports. If the phone starts to charge, then the ports are fine. I hooked it up, and phone was charging... I was shipped a defective Rock Band! NOOOOOOOOOOOOO!!!!!!!!!!

Feeling pretty bummed out on Saturday morning, since friends and family were coming over to rock out later on, I decided to call the place I got Rock Band from. I wasn't expecting to get through since the place is closed on a Saturday. Angels smiled down that morning because someone picked up. I told them the situation and without hesitation, they offered to replace all the instruments. But they were going to be shipped via UPS. Not today, friends. I told them I'd go grab them myself since I needed it that night. I grabbed my little one and off I go to Burbank, CA to get my gear. Traffic was horrible, naturally, and after going through all kinds of traffic jams and accidents, I finally get there and get my stuff replaced.

Shortly after getting home, I nervously hook up the instruments. People were coming in less than 2 hours and I don't even know if the instruments will work. I put in all the replacement parts and hooked everything up and to my relief.... SUCCESS!!! Whew.... The kids and I got our band going and tested everything out and it all worked like a charm. That was a close one.

So how was it, you asked? Pretty bad ass, thank you. lol Family and friends showed up shortly and while it was still "early", we allowed the kids to stay up with us to enjoy the game. Once their bed time rolled around, the party started. If someone failed at their instrument, causing the band to fail, you were forced to take a shot. Liquid courage definitely got people off their asses and into the drum set, strumming away, or singing the night away. Great time, it was. Got to see some old friends, made a few new ones, all while hanging out with family. The band didn't start disbanding until after 4 AM. Great stuff. Below are just some of the snap shots of the night. Next time you're in town, you should follow the music over to Metallman's. That's really where the party is at. Later!

Here we are with our cuz, starting the night off right. 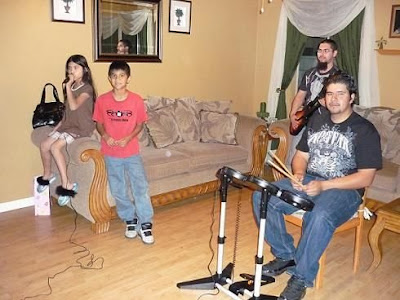 Haven't seen you since forever, buddy. Glad you were able to make it. 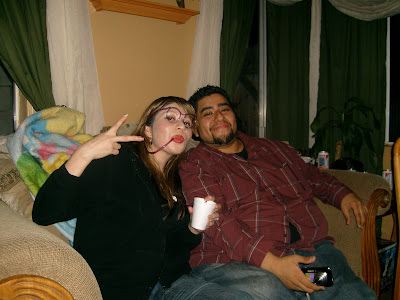 Damn proud of our accomplishments. 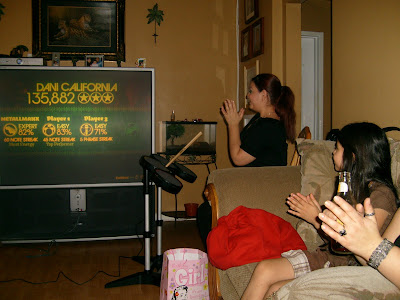 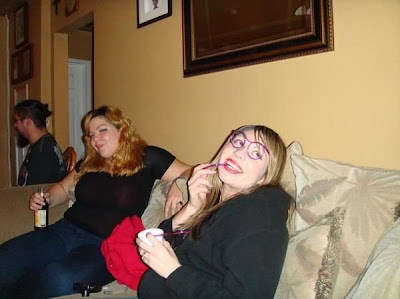 Can you tell that we are enjoying ourselves? lol 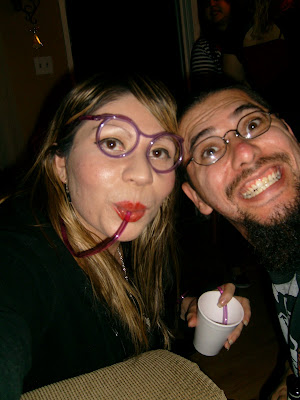 I'm telling you, a little liquid courage and everyone will start singing. 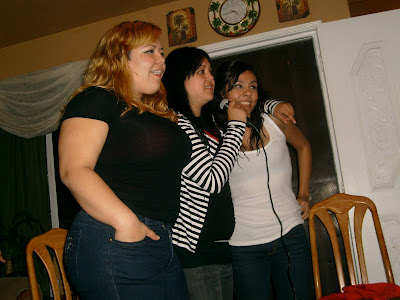 Even Metallman got into the act. 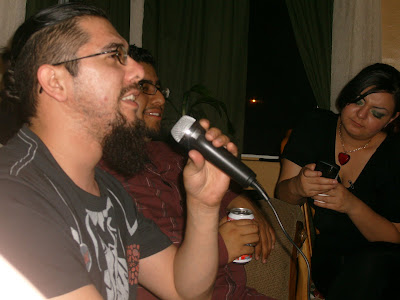 Our daughter playing guitar for her Nina. She's so bad ass, she doesn't even need to see the TV to know what she's doing. lol 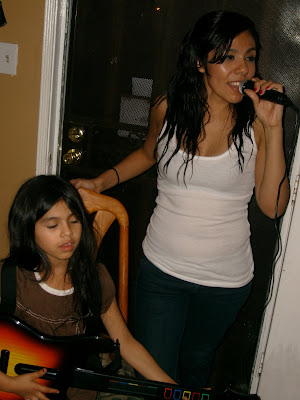 I walk into the kitchen to grab a few brews and this is what I see. Don't ask me what happened cause I don't know... lmao 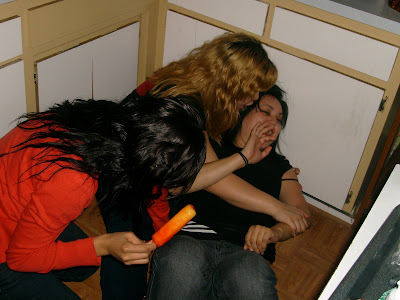