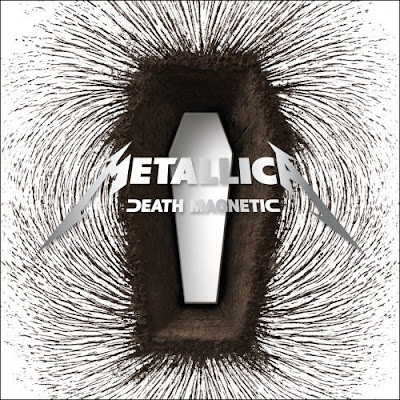 Hey there. My wife pleasantly surprised me with this album a few weeks back. A "just because" gift, so to speak and I after having a good two weeks of listening to it, I've decided... This album is bad ass! It's the first album in years that I can listen to from beginning to end without skipping a song. I wanted Metallica to "come back" with this album. Considering that their last few albums went away from their standard sound, I naturally figured that their new album might be another expansion of that. As a musician, you can understand wanting to expand and try new things. I didn't knock them for it, but c'mon, let's face it... it's nowhere near being their best stuff.

In comes Death Magnetic, the latest entry in 20+ years of Metallica music. It's not thier "old" stuff but it's not their "new" stuff either. It's a perfect blend of what made them who they are while continuing to expand and venture off to new sounds. Take the track, The Unforgiven III, for example. It starts off with a piano intro. Nice, melodic, and easy going. Not standard Metallica. After the minute mark or so, the band plays jumps in, with a clean sound, a little more intricate than Fade to Black, but closer to Unforgiven II. Not "standard" Metallica, but you can see them playing this. Then comes the verse. Heavy moving rhythm and lead guitars and the voice we all know and love all kept in time with a strong bass and drum. Good stuff. Perfect blend of what was done and what is to be.

Then we have a the heavy tracks like All Nightmare Long and My Apocalypse. I mention those two cause they're my personal favorite on the album. Fast, furious, and again, simply bad ass. There also is an instrumental track on the album. Suicide and Redemption is a perfect blend of 3 different songs. Each section sounding completely different from each other but sound so right together. Great stuff, this is.

I have a 2 Gig micro card on my phone. I'm very selective as to what music I put on there since 2 gigs is simply not enough to even come close to catalog all the music that I own. Without hesitation, I downloaded the whole album on my phone and play it at work, while working. lol If you guys haven't had a chance to take a listen, you definitely should. For all us Metallica fans that have been yearning for that classic Metallica sound, this is the album that should have come after the Black Album, if not before.

I haven't really learned to play any new music on guitar. Don't know if it's just that I prefer to play their older stuff like Creeping Death or Trapped Under Ice, or just plain laziness, but this album is sparking that bug in me to pick up that guitar and learn me some songs. I already started on Unforgiven III and This Was Just Your Life and it's definitely an album that I would like to learn to play from start to finish. The only album that I am able to do that with is Master of Puppets, sans solos of course. lol This may just be what I needed to get my ass back on the axe and grinding out to this album.

Take a listen to the album. Here's My Apocalypse for you guys to enjoy. Later!

Posted by Metallman at Thursday, December 11, 2008