Felt Good to Pick Up My Axe 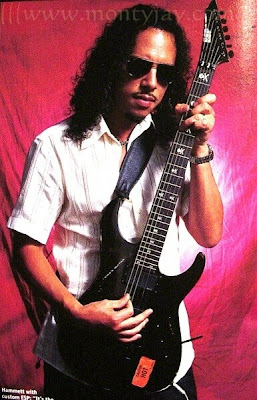 Hey there. I own a Kirk Hammett 602 guitar (KH-602 or "Skully" as Kirk likes to call it) and I haven't given it much justice as of late. I got it many, many moons ago at the Marshall store in Hollywood. The one right across the street from Guitar Center. I remember walking in and checking out the gear and fell in love with it. Felt good, felt great playing. I asked the clerk for a cable so that I can check it out. He did and after a few minutes of me playing some Metallica stuff, the clerk hooked up next to me and we jammed some songs together. After a good 30 min jam session (we were basically the only ones in the store) he asked if I was interested in taking it. Typical sales guy, pretends to be your homie then gets you buy something. I told him that the $1200 price tag was way out of my reach. Love the guitar, just not the price. He then revealed to me that he's is the owner of the store and because I'm a "cool guy" he'd give it to me for $700 and throw in a guitar case. Did this guy practically slash the price in half?!?!?!!? Instead of me pouncing on the deal, I was being a geek and asked him if he was sure about that. The guy practically said that he owns everything in the store and it's really up to him to decide how much he wants to sell things so he said it was more than cool. Needless to say, I took it. I'll never forget that guy for hooking me up. Thanks to you, owner of the Marshall store. You're one bad ass guy. 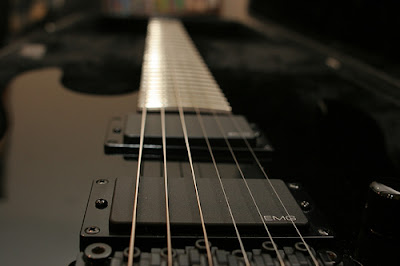 Anyways, I played here and there from time to time but haven't learned anything new. My skills have diminished some, as all skills will when you don't put them into practice. I can still play the songs, though I will blank out at times. Like the intro for Fade to Black, I started to play the intro solo but once I got to the second half of it, I had to stop and think for a min to remember how it went. lol I hate when that happens. Once I felt I warmed up, I got to my first new piece of music in ages. I began to learn the Unforgiven III. I chose it because I know it didn't sound very difficult and would be a good stepping stone to get into the latest array of Metallica music. 30 or so mins later, I was able to play it from beginning to end. All I need to learn now is the solo. Good stuff, it is. I'm already determined to learn this album from beginning to end and I know I'm going to drive my wife crazy with it. I tend to play with the album. I learned that many people will "learn" a song but learn it wrong because they'll play it the way they feel is right. I always play with the album because if it sounds wrong, I know for damn sure it's not the album. LMAO Once you learn it and you want to make it your own, so be it, but you got to respect the artist and learn the song correctly, you know.

Because I haven't played in so long, I lost that tough skin that comes with a guitar player's hand. "The Admin" at New Dilemma knows what I'm talking about. You can always tell a guitar player by looking and feeling their fingertips. I lost my edge, but sure as hell, I'm going to get it back. Check out my hand after a good grinding on Skully. What a great way to just let the music over take you. I love it. I need to be in a band. lol Later! 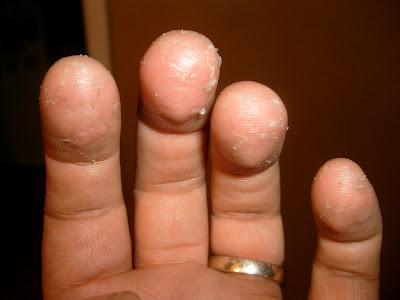