Hey there friends. This weekend was just full of howling winds outside our home. So much so, that the wind destroyed a canopy tarp that I had outside. The wind literally cut it in half Saturday night. It woke my wife and I up several times too, since it seemed to come out of nowhere and surprised us in the middle of the night. I got up, and looked outside and the trees were swaying and leaves were falling. My wife said to me, check on the bunny, he's probably cold. I checked and he looked fine, but I figured,you better go out there and cover him up. I sleep in boxers, people. I don't sleep covered up for some reason. Maybe it's cause I don't feel comfortable.

Anyways, I walk out there, half asleep, and cover the rabbit cage with three towels. It was freakin' cold. I didn't realize how cold it was until I was walking back in the house, in boxer shorts and still half zombiefied. I got up two more times that night, once to check on the rabbit, and second time because this loud snap woke me. I look outside and this is what I see... 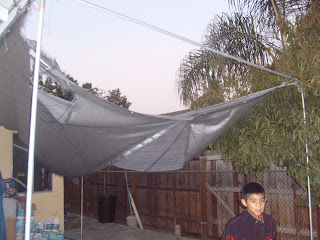 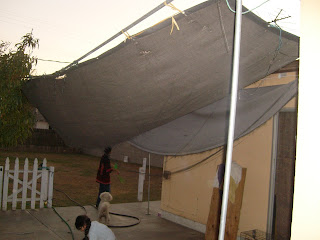 I was also worried about our new avocado tree. My wife's aunt gave us a tree that she nurtured from a seed (or pit) and it's a good 7 feet tall now. She definitely has a green thumb. The tree is still young though, and the trunk is awfully thin so I was afraid that maybe the wind might snap it in half. Luckily, it's still in the pot so I was able to place it against the wall of the house to avoid it getting heavily blasted by the wind. I checked it yesterday and it seemed fine. Now I'm a little reluctant to plant it since I don't know if the winds are going to continue. I don't want our new tree to freeze to death, let alone be snapped in half. That'll suck be big time. 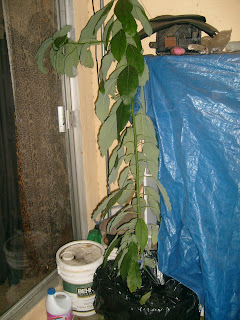 The winds continued through Sunday. I brought the rabbit (which still does not have a name. It's interim name is "Fluffly". We took it to PetCo when it was little but their "rabbit expert" said it was too young to be able to tell the sex) inside the house and he chilled in there all day. Better than a cage with wind blowing in your face. Odin stayed outside. I should have brought him inside. If the winds are still bad tonight, I'll let him come inside for a bit. He never got the concept of being house broken so I dare not let him spend the night inside. lmao At least he has his dog house to protect him.

Now, I need to look into getting a new tarp to replace the ripped one. Looks like I'll have to measure it to see what size I'm going to need. I've been complaining that it doesn't feel or look like Autumn yet. It's been extremely hot and sunny here in California, even though we're in November. Looks like mother nature decided to give me a good dose of what I asked for. lol Later.
Posted by Metallman at Monday, November 10, 2008