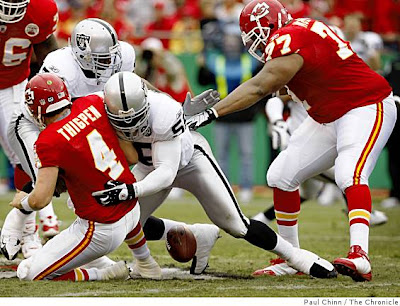 Hey there. Football Sunday was not as well as last Sunday. Not because of football. I caught some pretty good games and all, but because I woke up that morning feeling like crap. Head pounding, body aching, and my nose a runnin'. I plopped myself on the couch, covered with a blanket, and just lied there watching my Raiders kick some Chief ass. I tuned back and forth between the Raider game, the Indy game, and the Saints game. Keeping to my Raider loyalty, I always select a few players from the Raiders to be on my fantasy team. This year, I have their defence, kicker, JaMarcus (backup), and their Miller, their tight end. I don't expect JaMarcus to put up big numbers because of the run game, so I expect that Miller would be big for the passing game, catching many short passes. So far, it hasn't happened. Also, word on the street is that the coach Lane Kiffin may be on his way out. Dude can be fired as early as today. We'll wait and see what's up with that. 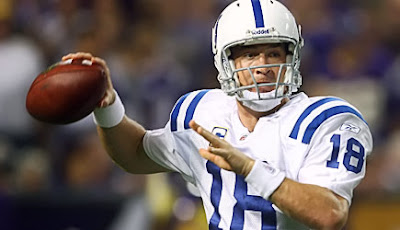 As for Indy, Peyton, you're supposed to be my cream and butter, man. You only scored me a measly 9 pts or so. I expected Manning to post 20+ pts a game for us fantasy players, but again, many of us expected Brady to do the same and that ain't happening either. Even though they came up with a win on some last second heroics, their game was completely put off by the inexperience of their O-line. Ugoh got hurt and that was that... Saturday was out, Clark was out (also my fantasy team. Waiting for him to get healthy since I know he's a better TE than the young Miller)and now Ugoh. Pass rushers were all over Manning, pressuring him to toss 2 INTs in a mediocre game for Manning. Get it together guys.

I kept tabs on the Saints game because I have Reggie on my team. Didn't get much out of him this week. He had a great game last week but not this time around. I'm glad that they're using him more in the passing game. With his explosiveness (which we saw glimpse of in Week 1) he should be able to break a tackle or two for some big yardage. The Skins, however, relatively kept him in check. I'm surprised that they came up with the victory. Saints D couldn't stop them on a critical 3rd down conversion late in the game and that was that.

As those games ended, me feeling more like crap, the afternoon games started. Brett Favre and the Jets up against the Bradyless Bradys, I mean Pats. On the other channel, Denver and the Bolts. Had to keep an eye on the AFC West rivals. I saw more of the Denver game since it was more enticing. The Pats game had a relatively slow tempo to it while the other was basically a shootout. It wasn't with some controversy too. In the red zone, with SD looking to score, their WR caught the ball and when he hit the floor, the ball came loose. For all of us football fans, we know that if the ball comes loose because of the ground, the player is down. Well, they ruled it a fumble, Denver recovers, and even though the Bolts challenged it, the "replay equipment was not functioning" so the play had to stand as called. Denver makes em pay scoring a TD on that drive. Fast forward, late in the game, Denver is driving, now in the red zone looking to score. Cutler breaks to his right, cocks his arm for the throw, but what's this?!?!?!! It slips out of his hands, SD recovers the fumble with less than 2 mins left and SD up by 7. Game over!!! NOT!!! Refs blew the whistle once the ball his the ground, the play being called an incomplete pass. The weird thing about it is that Denver was at the 2 or 3 yard line when Cutler fumbled, but the refs placed the ball on the 10 yard line. What the hell is that? Denver ended up scoring and went for 2 instead of trying. Guess they were leaving it up the football gods to see if they really deserved to win. The gods answered, and Denver converted, winning the game by one. Check out the highlight reel of the fumble below:

At this point, I knocked out. My daughter snuggled up by me and we took a nap. Didn't even see the Cleveland game so I don't know how that turned out. Now, I'm here at work, coughing away, still feeling like crap. Hopefully, I'll be sent home, doubt it though. Took some dayquil that my mother in law gave to me. Hope it makes the headache subdue in time to enjoy the Dallas - Philly game. The surging McNabb against the sexy pick Dallas should be a good one. Take care, friends and catch you guys later.

Email ThisBlogThis!Share to TwitterShare to FacebookShare to Pinterest
Labels: Football