Hey there. As most of know by now, the Olympic games are well into their second week and many competitions have been held and won. I love the games. I think it's because I'm so competitive that I want to see my country go out there and kick ass. Well, last night I was up watching the games, as I have been these past two weeks. On the local channel, I see the big name sports going on. Track & field and high diving, stuff like that. On the "Olympic" channel, I see the "Race Walk". WTF!?!?! That's right. Race Walk. I couldn't believe it. I've never heard of such a thing. Someone was going to get a gold medal for being able to walk real fast. It was the women's race and my first impression of it was, "Damn, they look like fish trying to walk on their back fin." I even got my wife up so she could see it. 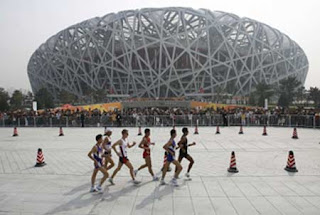 I'm for diversity, I'm for great atheltic feats, but I'm not sure that power walking should be an olympic competition. There has been talk that baseball will be removed from the olympic games. Now, I'm not a baseball fan. I find it quite boring (to watch at least) but nevertheless, I recognize that it takes atheltic ability to be able to perform at a high level. Especially when you're up against the best in the world. And from what I hear, baseball will be removed as an olympic game starting with the next olympiad in London. C'mon on now. We are going to keep power walking but get rid of baseball??? Unless I'm missing something, that is stupid. Maybe the race walk is an age old tradition that has been around as long as the loympic flame. If it is, I can understand why you want to keep it around. But if it's not, it's got to go. Later.