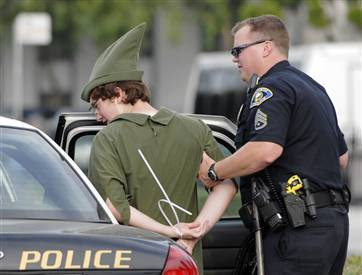 Hey there friends. Looks like Mickey is not sharing the monies earned with the rest of the Disney characters. From MSNBC.com, "Cinderella, Snow White, Tinkerbell and other fictional fixtures of modern-day childhood were handcuffed, frisked and loaded into police vans Thursday at the culmination of a labor protest that brought a touch of reality to the Happiest Place on Earth."

Read all about it here.

Can you imagine the look on the kids faces when Snow White and rest of the princess gang are being hauled off in a cruiser. Damn... lol Later.
Posted by Metallman at Friday, August 15, 2008