Are You Type A or Type X?

Hey there friends. I meant to post this yesterday, but I didn't have the pics available and I didn't want to do it without the visuals. My wife and I took a "Mental Health Day" from work. Basically, we took a day off. I walked in the office, told the boss the we taking a mental health day and we're good to go. We went to Six Flags, since we've been wanting to go for some time. My wife was a little reluctant, especially since we've recently had an earthquake and aftershocks are still going on here and there. We told ourselves that if we there was a sign that we shouldn't go, we won't. No signs, all was good, and off we went. lol

Last time we were there, it took forever just get on a ride. More like 2 hours just to hop on Goliath and another 2 for Tatsu. Not this time around. We went in the middle of the week and this is how I was hoping to see the lines. Free and clear and us being able to walk right up to the ride. 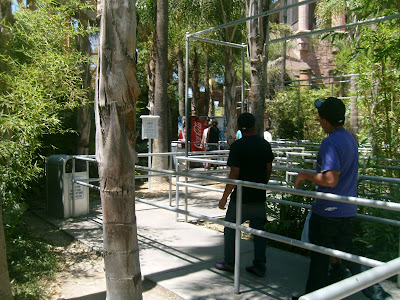 We were able to get on many of the rides with no more than a 15-20 min wait. The only ride that we really waited for was X2. Now that is an experience. Even waiting for the ride was something. There are TVs everywhere showing clips from Break.com Many extreme sports and people having the falls of their lives. lol 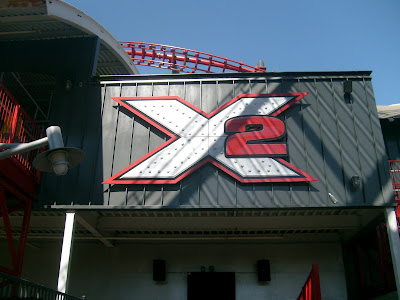 The slogan is everywhere too. "Are you type A or type X". Well, for those of you that haven't seen the ride, instead of being strapped in a cart, you're strapped to a seat that hangs off the side of the rail. The ride's description gives the impression that all your senses will be used and I'll say it's mostly true, since I don't remember using smell... unless you count the fire. Yes, the ride has fire. lol Once you're strapped in, the speakers on the ride come on and as you go up the rail, backwards mind you, Metallica's Enter Sandman plays. How fitting. lol The ride is short, no more than 45 secs or so, but because the seats rotate 360 degrees as you ride, the coaster spins your seat on every turn and loop, giving you an extreme experience. Don't believe me? Check out my wife on the below pic. 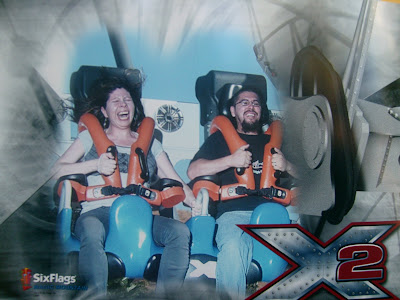 We just had to buy it. lol It was non stop shrieking from my wife the moment that we took that first plunge. I got her permission to post it here. She didn't want anyone to see it and said something along the lines of, "You can post it on your blog. No one reads that." lol I'm assuming she meant no one that actually knows us. lol I soooooo wanna get that blown up and framed. Put that sucker right in the middle of the living room.

We got on many other rides and took pics with the characters. Batman and Robin were definitely the funniest. The bastards posed and right before the pic was snapped, they would either jump up in the air and do some weird shit or they would start punching and kicking. I think they were bored. While taking the pic, you hear them both going, "Jab, jab, kick, midget punch! Hya! Hya! Hya!" You read that right, Batman said midget punch. Had my wife rolling. Good thing I didn't hear or I'd be laughing my ass off too. Here is the "tame" pic, that they decided to pose for. 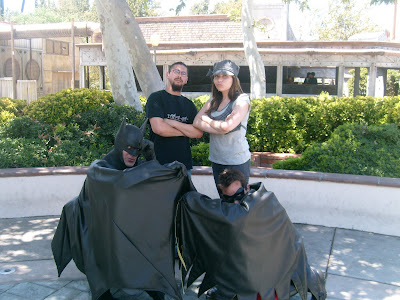 We also took a pic with the Riddler and The Scarecrow. The only reason I'm posting this one is because while taking the pic, some guy saw The Scarecrow and yelled out, "Hey! Look! It's Sackman!!!!" Man, the crowd around us started laughing, including myself. My wife didn't think it was funny. I laughed, and laughed hard. What do you think? Sackman or Scarecrow? lol 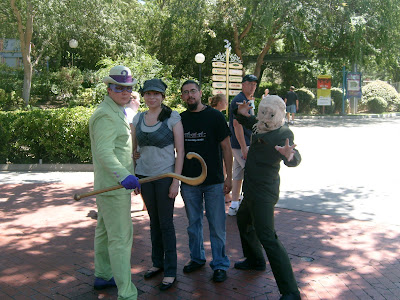 We capped our day with funnel cake. It was funny because our feet were hurting and we decided to call it a day, so we started to head towards the exit. This one dude passed with a funnel cake, I didn't see him, the woman in that group said, "Oh, we gotta get a funnel cake." My wife and I both turned to look at each other so quickly that we damn near broke our necks. lol We were on the hunt to get us some funnel cake. We found the place, which conveniently was right by the exit, and handle our strawberry and chocolate funnel cake. Mmmm... funnel cake. 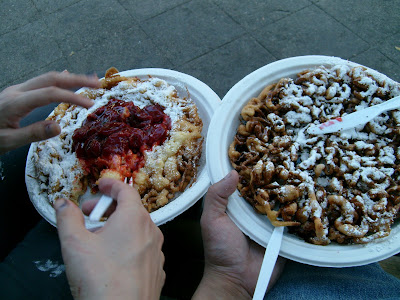 Take Mental heath days, people. We all need to just get away from it all from time to time. If you don't, you'll just burn yourself out. Gotta be a kid again sometimes and just go out and have some fun. Later! 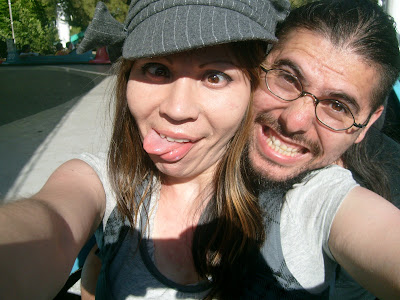